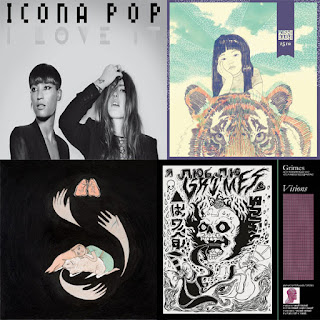 This blog saw it's existence born with a list of my favorite songs of 2011, so I find it appropriate to follow tradition and share some of my favorite tracks from 2012. It's been a fantastic year for new music, and it's tough for me to even wrap my head around everything that's come out in the last 12 months (did Visions really come out just this year?!). So as with my previous "best of" list, I claim no authority or all-inclusiveness. I'm sure I missed a lot of good records this year, and I am in no way unbiased (as you will notice by the narrow range of genres represented). Simply, these are the songs I listened to most this year, from the artists who I consider to be pushing the boundaries of music in beautiful and exciting ways.

I could have chosen every song on Purity Ring's incredible debut Shrines, and I may be the only person ballsy enough to leave off Frank Ocean in lieu of Carly Rae Jepsen, but "Call Me Maybe" is quite possibly the best pop song ever written, and I'm just not a fan of R&B. Get over it. Also, I recognize that "212" was originally released in 2011, but it wasn't until this year that Azealia Banks dropped the 1991 EP which featured said cut, so I think it qualifies.

"212" comes in at a close second to Swedish duo, Icona Pop's "I Love It" for best single of the year. It's a track that no matter your mood, will make you want to put a fist in the air and scream along to chants of crashing cars and not giving a fuck. While I wouldn't say the rest of the Iconic EP lived up to the anticipation created by "I Love It," this isn't a best albums list. So, my hat's off to Icona Pop.

On the other end of the spectrum, Kishi Bashi's 151a is a master piece from start to finish, and posed a real problem in choosing one track for this list. This artist, who no one outside of Of Montreal enthusiasts may have ever heard of at the beginning of the year, has been topping critics lists like crazy this month and if television commericals gave song credits, would be a household name by now. If I were attempting to tackle a best albums list, it would likely take top spot - so don't stop at "Bright Whites," go check out the rest of that record and thank me later. His mastery of loops make it hard to believe it's one person making this incredibly uplifting music. And yes, he can perform it live, which I will be witnessing tonight as we ring in the new year.