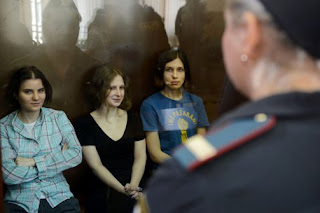 Hopefully we're all aware of what's going on in Russia with the two year jail sentencing of three members of Pussy Riot for "hooliganism" after performing an anti-Putin prayer in Moscow's main cathedral.

MEN support Pussy Riot and have this to say:

"On October 1st 2012 at 11am Moscow City Court will hear the appeal of the sentence Masha, Nadia and Katja.
This may be the last chance for the Russian judicial system to free the jailed members of Pussy Riot.
After this, the women are expected to be sent to three different penal detention centers, where we are very concerned for their safety.
Please check in at www.freepussyriot.org for more information."

Lend an two eyes, two hears, and a few minutes of your time to the song and video that MEN have created in support of Pussy Riot.